For the first time in about two years, Chris Waller has had to study the form trying to decipher why some experts thought Winx was vulnerable in the Queen Elizabeth Stakes.

He need not have worried with the mare again showing why she is rated the world’s best with her 25th consecutive win to equal Black Caviar and 18th at Group One level in the Queen Elizabeth Stakes at Randwick on Saturday.

She was ridden cold by Hugh Bowman from the outside barrier and made her customary move approaching the home turn.

Bowman took her to the outside and let her loose down the Randwick straight where she accelerated to sweep past Gailo Chop ($26) to win by three and three-quarters lengths with Happy Clapper ($11) running on for third.

Although she dominated the market at $1.24, she was as short as $1.15 earlier in the week, prompting Waller’s concerns.

“For the first time in a long time I sat down and went through the opposition,” Waller said.

“I have every respect for the other horses in the race like Humidor, Gailo Chop and of course Happy Clapper but she has been going as well as ever.

“I knew I had done my job but it is always a relief when she wins. It’s hard to describe what she can do.”

PHOTO: Winx accelerated from the back of the field to streak away for another win. (AAP: Daniel Munoz)

For Waller the build-up to the Queen Elizabeth Stakes has been a little different with media from the United States, Japan, France and England in Sydney.

“It’s been a learning curve,” Waller said. “We’re at a stage now we are used to this constant pressure which is pretty intense.

“As you see the great sporting coaches, I love watching them, seeing how they cope with losses, you don’t stop learning.”

One person who does know the pressure is retired trainer Peter Moody who guided Black Caviar throughout her career and was on hand to see Winx equal her record.

“Winx is unbelievable,” he said. “It’s a joy watching her and there’s no pressure on me.”

Bowman doesn’t show his emotions as much as Winx’s trainer, ever mindful of the job he has to do.

“There’s so many cogs to the wheel and I know I get the dream ride here today.

“God forbid if something went wrong it wouldn’t be a good place to be, but she’s so exceptional, she is able to overcome everything and what a pleasure she is for sport.

“I know I’ve got the engine to round them up, but I can’t do it on my own.

“The bottom line is she’s got lengths on her rivals. It makes it easy for me.” 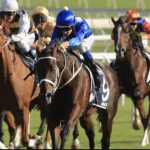 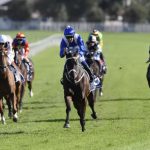