Winx has extended her winning streak to 28 races, taking out the Group One Turnbull Stakes at Flemington from Youngstar in a flashing finish.

It was not her usual dominant performance, however, with Winx forced to work hard for the win.

Ridden by Hugh Bowman, Winx started in her usual spot near the rear of the field in the 2,000-metre race as bolters Trap For Fools and Divine Unicorn led the way.

As watchers in the crowd waited for her to move through the gears, she made them wait, appearing to be caught for speed.

Winx was second last at the turn, and then caught behind a wall of horses in the straight, as doubts began to creep in.

Bowman had to be patient to give Winx time to get between Mighty Boss and another Chris Waller horse, Youngstar, before properly hitting her stride in the final 250m.

The champion finally got out and began to motor, as Trap For Fools and Divine Unicorn were still holding out near the rails.

But with the challengers hitting top gear, Winx was rattling home outside stablemate Youngstar — it took her until well inside the final 50m to hit the front, going clear to win by a length from Youngstar, with the Darren Weir-trained Kings Will Dream taking third.

Backing up from her win in the George Main Stakes at Randwick three weeks ago, Winx claimed her 21st Group One victory, extending her Australasian record for stakes wins to 30.

Mighty mare #Winx continues to astound. She charges home to win the Turnbull Stakes in front of a huge crowd at @FlemingtonVRC. #GoWinx pic.twitter.com/QVtByAsBep

Waller acknowledged having mid-race concerns over Winx’s position, but was happy in the end.

“What more can you say? She does us proud every time. We are very proud of her. Proud of [her] wherever she goes,” Waller told Channel Seven.

“She hasn’t been there [inside at the back] for a long time. I don’t know when … [It was a ] picture perfect Bowman ride, but you are waiting on luck, and fortunately the gap came.

As usual, the trainer chose to watch the race on his own.

“I did. [It was] pretty special. Although you get a few flutters, but once she had clear running, what will be will be.

“There will be a day where she is not as dominant, but today all she had to do was repeat her form and she did that.”

The winning jockey was not overly fussed by the narrow win, which he said left Winx on track for a crack at a record fourth Cox Plate at Moonee Valley on October 27.

“Usually I ride her arrogantly and let her move into the race, when it pleases me, but I didn’t have that option today,” Bowman told Channel Seven.”

“I was inside Grunt who I had healthy respect for. I was — I really didn’t want to be there, but didn’t have much choice.

“When the pressure went on it was good, because once we were all settled into our positions the pace was quite steady.

“When the sprint went on those horses that couldn’t quicken as well, it left a few options for me.

“Still, it was her champion quality that came out in the end. Youngstar is a quality filly. It was great to see her race so well.

“When I peeled off her back and went out after them I thought, ‘We are in for a fight’ but the final 100, it was extraordinary.

“That’ll do her good. She had to really dig deep over the final 600 metres today. That will bring her on nicely for the fourth Cox Plate hopefully in three weeks time.” 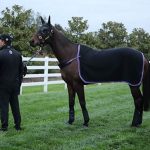 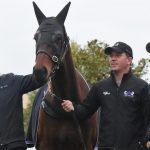