Saturday’s Turnbull Stakes is likely to be the last time Winx races at Flemington, with trainer Chris Waller all but closing the door on the prospect of his champion mare returning post the Cox Plate.

Speaking before a packed media scrum at Flemington, Waller said he and the connections are unlikely to be tempted to run Winx in the Mackinnon Stakes during the Melbourne Cup carnival.

“I would say so (this will be her last run at Flemington), we are just taking it one run at a time, we haven’t got too far ahead of ourselves in that regard, we are just talking one race,” he said.

“So Flemington Saturday in the TAB Turnbull Stakes is an important race, who knows what is around the corner with Winx, who would have thought after one Cox Plate four years ago that we would be here still now and not just running with distinction.

Winx galloped on the inside grass at Flemington on Thursday morning.

Her main piece of work ahead of the Turnbull Stakes was on Monday, whereas today was just to keep her on song for Saturday.

“Winx is well and the team is well, everything has gone to plan at this stage and hopefully the next two days are the same, I guess she is just a star in her own right,” Waller said.

“She makes us all look pretty good each and every time she steps out on a race track so we are not treating this race as any different.

“The sequence rolls on, we are prepared for the worst, as always, but it doesn’t look like anything is holding her back she is ready to run to the best of her ability.

“The trip down has been straight forward, with horses you always have some element of risk when they are transporting over a long period of time, hence the reason for getting her down nice and early, she is settling in well, she has been here a number of times before, it is like her second home.

“She had what we call a maintenance gallop today, she worked about 75 per cent pace over a 1000m and then breezed up a little stronger the last 400m, which is very standard for her whether she is competing for her first-up run of the preparation or her grand final, we are well in to the preparation now, it is just maintenance and making sure she is safe.

“Mentally she is perfect, physically she is picture perfect, we take photos of our horses every Monday 52 weeks of the year and we compared her to a photo from last year and if anything her coat is more advanced, whether that means anything I don’t know that is the only difference I can say, she is shining and ready to perform.”

Winx is currently rated as a $1.16 chance to extend her winning streak to 28 in the Turnbull Stakes.

“I haven’t had a good look at the field for Saturday yet but we always go in to every race just worrying about Winx and just making sure she is the same every time she runs out,” Waller added.

“She hasn’t got the world’s best rating for nothing, we just need to make sure she stays the same and she will hold that rating, it will only take a champion to beat her or a day where she is no longer as dominant as she has been but there certainly been no signs of that.

“Luck in running can play a big part, we also have respect for other runners and other jockeys, we will go in to the race preparing that way and hopefully she does the rest.

“The longer the race, the more pressure and the more pressure the better she is, she is vulnerable over the shorter distances because the winning margins are never as great, over 1600m and further, that is where the pressure really comes in to a race and that is what she is so good at, that extra 10 per cent is always there, whereas the others are often struggling in the last part of the race.” 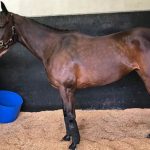 Winx flaunts dapples ahead of TurnbullNews 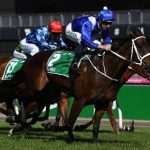