Will Winx go to Royal Ascot? Will she stay in Australia and concentrate on a fourth Cox Plate? Can she do both?

Such questions are expected to be answered by Chris Waller in the coming days but those who believe her slender winning margin over Happy Clapper in the George Ryder Stakes is an indication she isn’t at her best as a six-year-old mare, or not impressive enough to go overseas, may be a little naive.

The George Ryder certainly won’t be remembered as one of her most memorable victories, but it also provided a subtle reminder of her sheer power and ability to hold her top speed longer than her rivals, regardless of the circumstance.

On this occasion, the 1500m weight-for-age contest was a dawdle in the early stages.

Given there were only six runners and the absence of a noted leader, this was hardly a surprise.

Invincible Gem settled at the front of the field but the report from Daily Sectionals indicates the first 700m of the race was 11.9 lengths slower than standard, with the average based off 1264 samples.

Winx, settling towards the rear, was some 15.5 lengths below the benchmark to the same point and had already begun picking up her tempo with Hugh Bowman knowing he needed to get her in to the race.

This closing speed is apparent due to the lack of pressure in the first half of the race but the numbers are still impressive.

Winx’s ability to go from almost idling to full speed is quite remarkable and her effort in the George Ryder basically mirrors her run second-up last preparation, when she stormed home late to win the Chelmsford Stakes, according to Daily Sectionals’ Vince Accardi.

“Winx’s mid-race squeeze from the 800 to 400m of 18 lengths was virtually identical of what she did second-up last preparation at Randwick over 1600m,” he said. 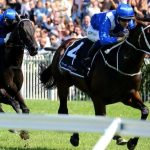