CHAMPION racehorse Winx has stolen the show on Golden Slipper Day with another memorable effort to win the Group 1 $1 million George Ryder Stakes, thrilling the huge crowd at Rosehill Gardens.

WINX — words don’t do her justice. Maybe the numbers can.

The champion mare stole the show on Golden Slipper day with another memorable effort to win the Group 1 $1 million The Agency George Ryder Stakes (1500m), thrilling the huge crowd at Rosehill Gardens.

Sydney’s super mare is a phenomenon. Every start, she crushes, her rivals, breaks records for fun and enhances her everlasting legacy as one of the all-time greats of the turf.

SHE scored her 24th win in succession, trailing by one win the record of unbeaten Black Caviar.

SHE has now met and beaten 57 individual Group 1 winners.

Trainer Chris Waller conceded he has run out of superlatives to describe the mighty mare.

“It’s pretty special but I try not to get too caught up in all the talk of records,’’ Waller said.

“But like everybody else who is a racing or sporting tragic, I’m pretty proud of her.

“I knew she was going for a world record today but in the build-up to the race I tried not to think about it. She is great for the sport and these records are something we can look back on with pride after her career is over.’’

Fortunately for race fans, there is no sign of Winx’s racing days ending any time soon. The great mare is going as well as ever and still enjoying her racing as she showed again on Saturday.

This wasn’t the walk in the park most expected but Winx ($1.16 favourite) always looked in control of the race, scoring by nearly a length from a very game Happy Clapper ($21) with Kementari ($8.50) a length away third.

Winx’s jockey Hugh Bowman settled the great mare at the rear of the small six-horse field and was content to let her travel three-wide most of the race.

“It was a bit of a tactical race, there was no pressure early,’’ Bowman said.

Winx and Hugh Bowman parade for the huge crowd on course to see their queen. Picture: AAPSource:AAP

“I actually never went in behind Brenton (Kementari) because I could just feel I was getting away from them a bit.

“They are high-class horses and I’ve never treated her opposition with disrespect, I’ve always treated them with the respect they deserve.

“Happy Clapper is a supreme athlete but look this mare is just better than them. I have so much confidence in her, she gave me such a thrilling feeling as she did everyone watching here today.

“I could feel the crowd erupt as we went to the front at the 200m and a world record, what a special, special horse she is and I’m just so grateful to be her jockey.”

24 of the the best for our Mighty Mare!!

Witness what can only be described as poetry in motion as Winx breaks the Group 1 record with the kind of performance we've come to expect of her in the George Ryder. She's done it again!! #GoWinx pic.twitter.com/3YFpzW9wkm

Waller confirmed Winx will go to the Group 1 $4 million Longines Queen Elizabeth Stakes (2000m) at Royal Randwick on Day Two of The Championships, April 14 — and hinted a decision on whether the great mare goes to Royal Ascot in England in June will be made this week.

“To be fair to the owners we haven’t even discussed Royal Ascot yet,’’ Waller said.

“Obviously we know when it is and what the races are in Europe but today was very important to see her come back and be fairly dominant.

“It’s on to the Queen Elizabeth in three weeks time, it’s the signature race in Sydney which we were never really going to miss.

"She gave me such a thrilling feeling, as she did everyone watching"@HugeBowman returns from injury fit and better than ever as his legendary partnership with Winx continues. Praise for the connections, competitors and the mighty mare from Hugh!! #GoWinx pic.twitter.com/uhVRZ0t9El

“But we’ve got to talk about coming back if she went to Europe and race in her fourth Cox Plate, she can only really go there for one run, possibly two, but we’ve got to put all the cards on the table

“She’s obviously most important and we will let you all know, her career has never been hidden, we do respect everyone that follows her here and on the other side of the world, wherever that may be.”

Photographers race to get a shot of the champion mare. Picture: AAPSource:AAP

Owners Peter Tighe and Debbie Kepitis preferred to soak up the moment rather than think about Royal Ascot.

“For me, the overwhelming emotion I feel after a race these days is relief just to get it done,’’ Tighe said.

“The crowd reaction was super, they make it so exhilarating for all of us.’’

Kepitis said her heart was racing almost as fast as Winx was galloping.

“The pressure seems to build every race,’’ Kepitis said.

“But what more can you say about a horse that does these wonderful things.

Happy Clapper has been beaten by Winx in seven races now but his three-quarter length defeat is the closest he has come to beating the great mare.

“It was an amazing run again by him running into Winx is a bit hard to swallow,’’ jockey Blake Shinn said of Happy Clapper.

“He’s put his heart and soul into it this race, it was a great run. Bring on the Doncaster.”

“I was very happy with him in his first time at weight for age,’’ jockey Brenton Avdulla said.

“I just rode him comfortable where he was nice and quiet. I saved him for a dash up and he was beaten two lengths by the mighty mare.

“He meets Happy Clapper a lot better at the weights in the Doncaster. He only gets 51.5kg. It’ll take a good horse to beat him.”

Winx and Hugh Bowman didn’t have it all their own way but the champion did enough to make it her third consecutive George Ryder Stakes victory. Picture: AAPSource:AAP 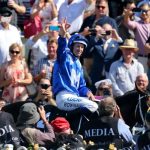 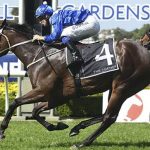