The stars were out at Rosehill this morning, with the mighty mare Winx enjoying a cruisy gallop — but the enigmatic Chautauqua was up to his old tricks, not willing to play at all in a barrier trial.

The rising eight-year-old has become a thinker in the barriers. Less than two weeks after looking like the Chautauqua of old in winning a Flemington jump-out, it was evident to jockey Tommy Berry that his demeanour in the gates was different.

When the starter released the field, all bounced into stride bar the grey gelding, who wasn’t willing to take part.

She Will Reign wins whilst Chautauqua stays in the barriers @rosehillgardens pic.twitter.com/P8DkXupK9i

Connections have ridden an emotional rollercoaster since a barrier incident at Moonee Valley last spring, where Chautauqua lashed out in the barriers and was withdrawn by the vet. In March and April, he began shirking the task of jumping away.

Connections will not make a decision on Chautauqua’s racing future today.

"I've reached the highest of highs on the horse, it was heartbreaking." @TommyBerry21 comments on Chautauqua's failure to jump. pic.twitter.com/u1K0zkw8QJ

First trial of the campaign and, as is customary, trainer Chris Waller made it clear Winx would be having a quiet time, essentially there for a blowout.

Ears pricked, coat bright and shiny, Winx was widest and last to the turn and not asked to extend until the final 100m, picking off a couple of rivals and extending her stride passing the winning post.

Jockey Hugh Bowman said, as she can be when fresh, Winx was “a little edgy” when put in the starting gates and she was more there to take the edge off.

“She felt great but was a little more anxious in the barriers. We wanted to release some of that nervous energy,” Bowman said.

“This morning was about going through the motions. I think between now and her next trial we’ll see her switch on and her work pick up.”

Golden Slipper-winning mare She Will Reign defeated Take Down and Kementari. The time for the opening heat, run on the course proper, was 54.9 seconds. 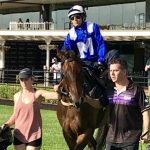