In what was likely to be her farewell to Sydney racing for 2018, Winx once again thrilled the crowds at Randwick with the world’s best racehorse stretching her winning run to 27 when she took her third Group 1 Colgate Optic White (George Main) Stakes on Saturday.

Winx unleashed what is now a trademark performance from the rear of the field with Hugh Bowman sending her three-wide on the turn before letting her loose to win by four lengths.

Winx is now expected to come to Melbourne over the next week or so to be readied for the G1 Turnbull Stakes at Flemington next month, which will leave three weeks until her date with destiny and a possible fourth Cox Plate victory.

“If you expect to win races at the 300 metres every time you will probably come off second best but it was a well-judged ride by Hughie. He knew he had the extra 10 per cent that you see with her every start and it gets her out of trouble and is why this winning sequence continues.

“It is quite unbelievable and she has some gears and I hope we don’t need to find any more gears but it is very special not just here at Randwick but around Australia and wherever she races, most importantly on the TV.

“It keeps going to a new level every time and she is a superstar.”

Waller said no decision had been made on where Winx races next.

“We will see how she pulls up and we said we would take it one run at a time,” he said.

“We are thinking about a Cox Plate obviously and the best way is to take it one run at a time.

“I would say it will be in Melbourne (next) but we will enjoy today and talk about it next week.

“It will be no great surprise I am sure but if we do change it will be for a reason and that reason is the horse comes first.”

Bowman said for a few strides he thought Winx was going to struggle to complete yet another decisive win.

“Le Romain ran a hell of a race and at the corner, I didn’t feel in danger, but I didn’t feel like she was going to be as dominant as she usually is,” Bowman revealed post-race.

“But when that turbo kicked into gear at the 250 metres, it was all over.

“She just knows what she is doing now. I used to control her through the gears, through the race, to help her know when and where to give her full energy but she knows now.

“I suppose I have got to learn with her and understand, and I am learning with her, but it’s the first time I have niggled her around the corner in a 1600-metre race but I guess that’s a couple of things.

“The pace we were going and the class of horses she races against. They are the best in the country.”

Bowman said he attempts to ensure he takes nothing for granted when he wins a race on Winx.

“Without my family here to enjoy the experience it wouldn’t mean as much,” he said.

“She’s brought so much joy to not only those connected with her but far and wide across Australia and the world.

“She’s just a marvel isn’t she.

“We’ll be lucky to see another one like her, while I’m alive anyway. I think that is a given. How lucky am I to be involved with such a horse?”

For a fleeting moment jockey James McDonald thought he was a winning chance when Le Romain forged clear at the top of the straight.

“I thought I pinched it then I thought Winx is in the race. He’s gone good,” McDonald said. 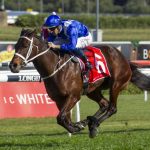