There is power and grace to Winx that Chris Waller and Hugh Bowman know so well.

Winx made it 27 in a row in the Colgate Optic White Stakes at Randwick on Saturday. This time she ran past a three-time group 1 winner in Le Romain at the 150-metre mark and then put four lengths into him. That is the power.

“I turn up desparate to see that power like everyone else,” Waller said. “You don’t see it until the final 200 metres, it is pretty special to share with everyone.

“When you think back, it was there for the first win of the sequence [in the Sunshine Coast Guineas] when she came from last, but we didn’t know how good that was.

“It is quite unbelievable and she has some gears and I hope we don’t need to find out whether there are any more gears.

“It keeps going to a new level every time and she is a superstar. I did enjoy that, the last 100m was quite special.”

Winx opened up a four-length margin to Le Romain with Queensland Oaks winner Egg Tart in third. It was a 20th group 1 win, the 11th at Randwick.

The grace comes when Hugh Bowman puts her back in cruise control for the final 50 metres when the race is won.

“It is different to riding anything [else]. I know when she balances up there are four or five lengths that are coming,” Bowman said. “No other horse can do that.

“Le Romain ran a hell of a race and, at the corner, I didn’t feel in danger, but I didn’t feel like she was going to be as dominant as she usually is. But when that turbo kicked into gear at the 250m it was all over.”

James McDonald rode a perfect race on Le Romain and had a brief feeling he might have the race won. “I thought I pinched it, then I thought, ‘Winx is in the race’. He’s gone good,” McDonald said.

Waller will make a decision on her next run, before she attempts to win a fourth Cox Plate. It is likely to be in the Turnbull Stakes at Flemington. But he reminded everyone how tough it is to get here.

“To have 27 wins you have to go through some quite intense work, 27 times. You have to bring a horse to the races 27 times and you go home safely 27 times,” Waller said “That is quite remarkable.

“I think she can only do it because of her ability. She is not getting bottomed out in races. She is going home as if it is a training gallop.

“It must be an expectional skill to do that. It is actually impossible what she is doing. And what Black Caviar did and what Makybe Diva did wining three Melbourne Cups in a row.

“It is heroic what she is doing.” 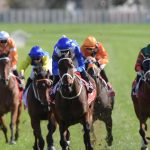 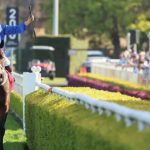