WITH Cox Plate history beckoning, trainer Chris Waller has not ruled out an Emirates Stakes start for superstar Winx. Waller is elated with Winx’s recovery from a resounding Turnbull Stakesvictory and, while adhering to a “race by race” approach, says there is a chance of another Flemington appearance for the wonder mare.

His priority is ensuring Winx is in peak condition for a bid at a record-equalling third Cox Plate at Moonee Valley on October 28 — when she will chase a 22nd successive win.

Asked if the world’s best turf galloper would return to headquarters for the $2 million Emirates on November 11 — on the final day of the Melbourne Cup carnival — Waller said: “There’s a chance but the horse comes first.

“Longevity is the key now and how much she puts into her races, we don’t really know. “One race at a time and while she keeps winning, she keeps the dream alive.” Waller said Winx was unable to continue Melbourne preparations after Cox Plate wins in 2015 and last year because of extenuating factors.

“After each of her Cox Plates there’ve been reasons (for not continuing),” he said. “The first time, she was a very immature four-year-old mare. The second one, she got galloped on and needed antibiotics.”

Waller was amazed by Winx’s recovery after her 21st consecutive victory, a Group 1 cakewalk at her Flemington debut. Waller said Winx went back to her stables and ate up every scrap of food.

“Most horses leave 10 to 30 per cent of feed after they’ve had a race. It’s a good sign that she ate up everything,” Waller said on RSN.

Waller said Winx pulled up sound and described the Flemington track as “perfect” and said it wasn’t “jarring”. “I had a walk of the track before the race and while it had a good a good firm base there was also moisture in it,” he said. Waller said the next three weeks were about managing Winx and keeping her safe. “She’ll do maintenance work over the next fortnight and then one or two proper workouts before the Cox Plate,” he said.

Waller said he was pleased Winx had silenced the doubters querying her Sydney form. “I’m sick of hearing it,” Waller said. “At her first run back she missed the start by five lengths and won by a length and a half so in effect she won by six and a half lengths.”

“It was crazy speed. Sectional times gave her no chance. Also she was at a mile (1600m) at her third run back from a spell when she was looking for 2000m,” he said.

Waller said Winx was in the best condition she’d ever been. He said when she won her first Cox Plate she weighed 495kgs and last year 505kg. He said this year she had got out to 535kg but would go into the Cox Plate at 515kg.

“She’s a much stronger mare with more cover over her body. Her coat is outstanding with the brown almost turning to copper. It’s special.” Waller said it was fantastic to see Winx travel so well in the run in the Turnbull Stakes. He said although he had taken the ear muffs out for the Turnbull Stakes they had done their job for her. “They got her back on track in the barriers. It was time to take them off.” 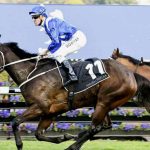 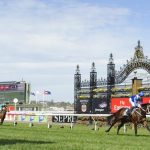