The reprise is complete.

“We don’t want her to disappoint,” Waller said after Winx posted her 25th triumph from 31 starts, underpinning standing as the world’s best turf galloper.

“She needs to be at her best to go to every race.

“She’s got a big reputation and she won’t retire with multiple unplaced runs next to her name.

“One race at a time and while she keeps winning, she keeps the dream alive.

“Obviously we’re keen to get her overseas to represent Australia, or this part of the world, so we’ll see what happens.”

Boosting her prizemoney to $13.7 million, an unextended Winx thumped her six rivals, prevailing by 6.5 lengths over Ventura Storm and wayward Humidor.

“(It’s) pretty special,” Bowman said. “No surprise, believe it or not.

“She was back to herself today. She was very unenthusiastic last start, for some reason or other. Maybe she just had a bit of a day where she just didn’t want to do it, but she still did it in style.

“She’s certainly back to where we know she is.”

Waller said Winx would how have an easy time ahead of her date with Cox Plate destiny on October 28, revealing he still believes her best is yet to come.

“Yeah, she’s a brilliant horse and whatever you ask her to do, she does,” he said.

“It’s as simple as that, she makes us all look good.

“It’s great that the public can embrace her. All of her wins have been so special.

“Look wherever she goes, whether it’s the Sunshine Coast, whether it’s Rosehill, Doomben, Randwick, Moonee Valley, Flemington, Caulfield — she just does a great job

“When she gets wound up and let’s go, it’s pretty sizzling.”

Bookmakers were as clearly taken with the chilling authority of Winx’s resounding victory as the 20,822 spectators at Flemington.

TAB trimmed Winx from $1.40 to $1.25 for the Cox Plate, triggering conjecture she could challenge Phar Lap’s 1931 record ($1.07) as the shortest-price favourite to start in the race.

“He (Ventura Storm) was terrific. She’s just the best horse in the world,” he said.

“I’ve never seen a horse put so many lengths on me in a short amount of space without any pressure. But to my bloke’s credit he’s ticking over beautifully towards the Cups.”

Ventura Storm’s trainer David Hayes said: “I was too busy watching mine. But she was obviously breathtaking. She beat them like she should have.”

“That is brilliant,” said Kepitis, again wearing her lucky black with blue and purple suit with purple-streaked hair.

“There’s just no words. Happy 21st. What a freak. An amazing horse.”

Validating theories she is even better in Melbourne than in Sydney, Winx extended her unbeaten run in Victoria to four.

With two Cox Plates, a Caulfield Stakes and now a Turnbull Stakes to her credit, Winx has again been more relaxed at Flemington than at Rosehill.

Bowman said the wide open spaces of headquarters had helped settle the mare.

“More open space, she can just do her own thing on the quieter days,” he said. “That’s my theory.”

Admitting his sole concern was when the earmuffs are removed and she enters the barriers, Bowman said Winx was perfectly behaved.

“She was just beautiful, she was very settled,” he said.

The only horse to have won more races in succession in Australian racing than Winx was the unbeaten Black Caviar with 25 wins.

The world record belongs to Hungarian mare Kincsem, who won all of her 54 races back in the 1870s.

We all now eagerly await Winx’s grand final where she will attempt to equal Kingston Town’s record of three Cox Plates. 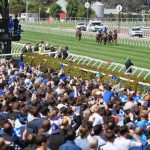 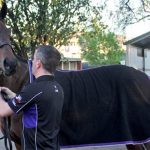