Champion mare Winx has etched her name into the record books in stunning fashion as she claimed a historic victory at Randwick.

Champion mare Winx has etched her name into the horse racing record books after once again crossing the line first.

The superstar strolled around the field on the turn before burning down the straight and reigning in Happy Clapper before Hugh Bowman eased her over the to win the Chipping Norton Stakes.

It takes her unbelievable streak to an astonishing 31 straight wins and gives her a world record 23 consecutive wins at Group 1 level.

Happy Clapper was forced to the front and with 1000m to go had opened up a wide margin and forced Bowman to wake Winx up earlier than previous races.

As they turned for home there was slight doubts as the gap sat at around seven lengths, but the champion never took her foot off the gas as she reeled in the challenger and crossed the line for the famous victory.

“The pace was very solid throughout and we had to make our way into the race,” said her long-time jockey Hugh Bowman.

“I know I probably looked in trouble at the 700m… but I knew she would she would find another gear and she did it with relativeease in the end, as I expected she would.

The incredible victory once again wasn’t without drama as Happy Clapper forced a change of tactics by exploding and almost holding on for the stunning upset.

Fans screamed and jumped out of their seats and gave the challenger a deserved standing ovation as she made her way off the track.

“I can see the sun going down, and hopefully we can get through two more races. She is a superstar. She is very, very special,” Winx trainer Chris Waller said after the race.

“I knew Blake would try and pull a rabbit out of the hat. I knew he wouldn’t be able to help himself. I didn’t expect him to do it that way. I had the horse to get me out of trouble and she has done it time and time again,” jockey Hugh Bowman said.

The win makes it four straight Chipping Norton victories for Winx and her 23 straight Group One victories pushes her above northern hemisphere jumper Hurricane Fly for the world record.

Legendary sportscaster Bruce McAvaney said “it’s a national event every time she races” with a huge crowd turning out at Randwick to see the champion mare race.

“It’s quite unbelievable, it’s racing of years gone by, we got a glimpse of it with Black Caviar of course, your Makybe Diva’s and now Winx following on from that, it’s indescribable for any sport and for racing and it’s exactly what we need.”

While she holds a stunning record, it appears there are a few records that are out of reach for her.

Puerto Rico’s Camarero holds the world record of 56 wins in a row before he lost, followed by Hungarian mare Kincsem with an undefeated record in 54 starts, before Puerto Rican horses Cofresi (49 wins), Condado (44) and Galgo Jnr (39) ahead of Winx.

Jockey Hugh Bowman said she has “nothing to prove”.

Speaking on SEN, he said she may still be around in spring and could even chase a fifth Cox Plate, which could get her closer to the top five consecutive wins. 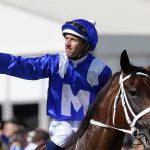 Record win for the queen of the worldNews 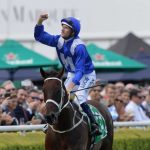