WINX isn’t getting any younger but it seems age — like her opposition — hasn’t caught up with the great mare just yet.

She is now a seven-year-old but the champion retains her zest and enthusiasm for racing as she proved with a dazzling barrier trial at Rosehill Gardens on Tuesday.

Winx came out of the barriers about a length behind the rest of the field in her 1000m trial.

She stayed at the back until the turn where she began gradually improving through the field under Bowman’s tight rein to finish third, only about a length from the winner, Alizee.

“I was very impressed with her,’’ Bowman said. “I asked her to do a bit more than her first trial and she felt as good as she looked.

“To be honest, I would suggest that is as good as she has ever trialled.’’

The champion jockey’s comments were music to the ears of Winx’s trainer.

“She looked pretty good to me, as you can tell by the smile on my face,’’ Waller said.

“It was also good to hear what I hoped to hear from Hugh Bowman which is that Winx has come back really well.

“Personally I could not have been happier with her trial and she is bang on target for two weeks’ time.’’

Winx is set to resume in the Group 1 Winx (formerly Warwick) Stakes (1400m) at Royal Randwick on August 18. 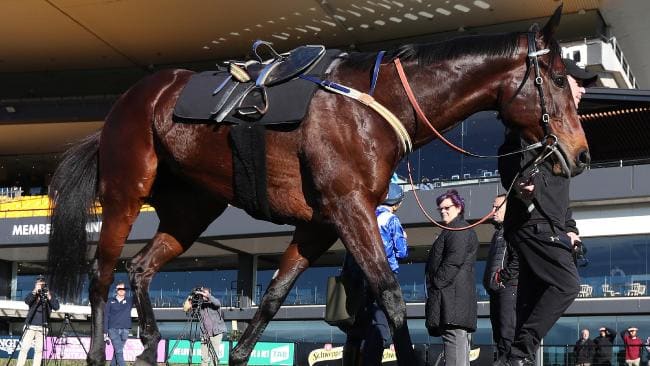 TAB Fixed Odds has already opened a market on the race with Winx at prohibitive odds of $1.10 to score her 26th win in succession, breaking the national record for consecutive wins she currently shares with unbeaten Black Caviar.

Bowman said Winx was “more relaxed” yesterday morning after her exhibition gallop between races at Randwick last Saturday and this may have contributed to her slightly slow start in the trial.

“She was again just a bit ‘bouncy’ in the stalls,’’ Bowman said.

“I put her in a bit early because I wanted her to stand there for a while just in case she draws in for her first run back next week. 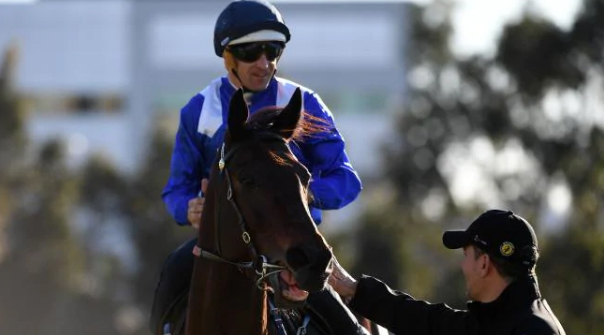 “I know she missed the start slightly and it is not what I want to happen on raceday but it doesn’t concern me as it is not out of character for her.’’

Bowman was also encouraged by Winx’s attitude: “There is no doubt in my mind she wants to be out there,’’ he said.

“In particular, last Saturday when she went to the races, with the raceday atmosphere, being in the public eye, she took advantage of it.

“I could barely hold her and she is in a good spot. I’m very excited about her return.’’

Waller has changed his training routine slightly with Winx by sending her out for an exhibition gallop in between the mare’s two scheduled barrier trials.

“I just wanted to get her to Randwick, (see) the new stalls, make sure she was relaxed with that and it helped to get a little bit of pre-race nerves out of her,’’ Waller said. “We have specifically made sure she is ready to go for the race named in her honour.’’

The focus might have been on Winx but this star-studded barrier trial field was loaded with potential spring carnival contenders.

Godolphin’s trainer James Cummings was more than satisfied with the trial efforts of Alizee, who won the trial with something in reserve, while veteran stablemate Hartnell also pleased with his close fifth.

Ace High, one of the early favourites for the Caulfield and Melbourne Cups, sprinted well fresh to finish less than a length from Alizee in second position, while Winx’s stablemate, D’Argento, was bolting wide out cruising into fourth place.

In the sixth heat where Chautauqua didn’t leave the barriers until his rivals were 500m in front, The Everest favourite Trapeze Artist raced sans blinkers and cruised into fourth, less than a length from the winner, Auchentoman.

Golden Slipper winner Estijaab stepped out in the eighth trial and after showing her usual brilliant speed to lead until well into the straight, she was eased down to run fifth behind the impressive Performer. 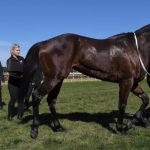 Winx emerges to amazement of Bowman in track gallop at RandwickNews 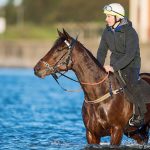