Winx’s farewell preparation ahead of schedule

Chris Waller wasn’t sure how other another preparation for Winx would be viewed but there are no signs that her prolonged excellence will falter at the start of her autumn farewell.

The seven-year-old has been back in the stable for nearly a month and everything remains in place that has made her Australia’s top-ranked horse for the past four years.

“She’s really well, she has had three gallops. Amazingly, she is showing the same keenness and enthusiasm for her work,” Waller said.

Before Winx returns, probably in the Apollo Stakes at Randwick on February 16, comes awards season for 2018.

She will be recognised with the Vox Populi Award – an American gong given to the horse that gets the most votes in an online poll – at Santa Anita next Saturday.

Then there is the Longines World’s Best Racehorse award in London on January 23, where Winx has been named the world’s best on turf for the past two years and also finished third and second to Arrogate for the top gong.

The title doesn’t worry Waller; he is more proud of Winx’s longevity and would like her to be remembered for that.

“To get a popularity award from America is amazing,” he said. “What I’m looking for her to get is the credit for being around for so long.

“We have made decisions to pull up when we could have gone another run. Not to take her overseas and doing certain things that would not make it harder for her.

Winx has won her past 29 races and her end-of-year rating has grown from 123, when she won her first Cox Plate in 2015 . That year she shared top billing with Lankan Rupee in Australia and was the eighth on the end-of-year world rankings.

In 2016, her rating went to a 132 from her Doncaster and second Cox Plate win and she was third.

She was rated 133 in 2017 to be second on the Longines World’s Best Ranking, controversially behind Arrogate which finished his career with three losses.

The final rankings for 2018 will be released in London later in the month and, at the moment, Winx rates equal top with Cracksman on 130.

The year just gone was probably Winx’s best – seven starts, seven group 1s, all with a comfort rarely seen at the top level.

But the Japan Cup win of Almond Eye and Enable’s Arc De Triomphe-Breeders’ Cup Turf double will have drawn high praise when the final rankings are compiled.

Waller is more concerned with readying Winx for her first barrier trial, which is likely to be at Rosehill on January 15. He is even toying with giving her an exhibition gallop after two trials before the Apollo Stakes.

“She is as good as we can have her. She keeps herself in check. she’s an amazing athlete,” he said.

“If you could put her into a sporting team she would be a shining star.

“You hear of horses going out for a spell and getting heavy, putting on condition, but she seems to look after herself.

“She is probably four days ahead of schedule this year and we could sneak an exhibition gallop in with her.”

The campaign is likely to follow her traditional path with runs in the Chipping Norton Stakes at Randwick on March 2, the George Ryder Stakes at Rosehill on March 18 and a finale in the Queen Elizabeth Stakes during The Championships on April 13. – Chris Roots, Sydney Morning Herald.

Winx is the wonder of the racing world, even in the USNews 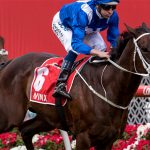