Australia’s darling of the turf Winx is set to barrier trial at Rosehill next Monday as the first step to a fourth consecutive win in the Group 1 $5m Ladbrokes Cox Plate(2040m) at The Valley in October during the 2018 Melbourne Spring Carnival.

Winx is the winner of her last twenty-five starts which includes eighteen at Group 1 level and the extraordinary mare is set to return to the race track in the race that is named after her, the Group 1 $500,000 Winx Stakes (1400m) at Randwick on August 18.

Trainer Chris Waller had selected the same race that Winx had resumed in for her last two Spring Carnival campaigns but it was known as the Warwick Stakes and was run at Group 2 level before being re-named and upgraded.

Waller is pleased with the way that Winx has returned to the stable following a spell after winning the Group 1 $4m Longines Queen Elizabeth Stakes (2000m) at Randwick on April 14 when she equalled Black Caviar’s record of twenty-five straight wins and both horse and trainer are working through the early days of her preparation in a very relaxed manor.

“We’ve been training her long enough to almost be used to it. The first year was just like training any other horse, the second year the pressure was on with the expectation to keep her performing. Do we try new things, keep it the same? Her body was changing,” Waller said.

“The third year she went to a whole new level again, getting close to Black Caviar’s records and other records, but now she has reached her fourth year, it’s just like last year but we’ve been there before. I’m actually feeling quite relaxed about her.”

Waller is also mindful of the fact that Winx will be a seven year old mare when she steps out for the first time this upcoming Spring Carnival and said he wouldn’t hesitate to call time on her career if things start to go wrong.

“So bring on the spring, and take one careful step at a time, have a bit of fun, and keep the fans alive and racing,” Waller told Racing.com.

“Let’s get her through to the spring, start her off and see how far we get.

“We’ll take a traditional approach and won’t be tied into anything in particular.

“The Turnbull option was fantastic in the spring for her, and it was great to get her to Flemington to stretch out on a big track, and we all know how dominant she is at Moonee Valley.

“We’d love to be there, but the horse will do the talking.

“There’s no other way of looking at it, and anyone would do the same if you were in my situation.”

Winx also created history when she equalled the legendary Kingston Town’s record of three consecutive Cox Plate victories when she beat the Darren Weir trained Humidor in the 2017 weight for age championship during the 2017 Melbourne Spring Carnival.

Early betting for the 2018 Cox Plate at Ladbrokes.com.au has Winx as the $1.55 favourite to make it four Cox Plate wins in a row, well ahead of Humidor at $15 and a host of hopefuls on $26. 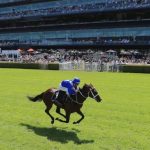