Trainer Chris Waller said Winx could be setting new peaks on the track, after a blistering finale in the Group 1 Winx Stakes for her 26th straight victory on Saturday.

Running in her own race as an already Hall of Fame inductee, Winx carried all that and more to a two-length win from Invictus Prince over the Royal Randwick 1400m.

Waller said it is most likely Winx next steps out in the Group 1 Colgate Optic White Stakes (1600m) – registered as the George Main Stakes – back at Randwick on September 15, having won the same race by the same margin (1.3 lengths) two years running.

Not that margin matters to her connections, who have ticked beyond $19million in earnings with the superstar mare, and Waller said she’s showing no signs of letting up.

“It’s possible (she’s better). She’s moving well, looks great, she’s stronger, and her body language – which is what we basically go off – is as good if not better than it’s ever been, so there’s plenty of positive signs to say she could be. There’s no signs to say she’s no better,” Waller said on RSN 927’s Correct Weight on Sunday.

He added of the plans ahead: “Just get her through yesterday’s run, and most likely go to the George Main in four weeks, it seems pretty logical.

“We like to space her races, and take one race at a time at this stage. I think through spacing her races, it’s been about longevity, and as a result, she’s racing so well now.

“For perspective, yesterday was just her fourth run since the Cox Plate. She could run any week we want her to, but longevity is key.

“Super, she pulled up really well. It’s as good as I’ve ever seen her pull up, actually.”

Much was made of Winx surpassing Black Caviar’s streak of 25 successive wins, albeit the latter’s record carrying the distinction of invincibility.

And Waller revealed he fielded a call from a fellow champion trainer from the other end of the country, Peter Moody having been in WA for the Broome Cup on Saturday.

“One of the special things yesterday, I got a call from Peter Moody last night,” Waller said.

“We’ll never take away Black Caviar’s record of being unbeaten.

“It’s just great with the two great horses, and remembering Makybe Diva not so long ago, and all the other great horses along the lines that keep everybody following racing.

“Hopefully Black Caviar and Winx bring a lot more on board as well.”

And Winx’s victory on Saturday has certainly put horse racing in the limelight – literally.

Check out this projection at Melbourne’s famous Flinders Street Station.

Having already got a mural in her honour a stone’s throw from her grand final theatre at Moonee Valley, and now an official Australia Post stamp released on Saturday, Winx is certainly having a widespread effect outside the racing bubble. 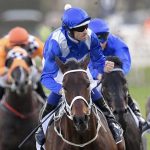 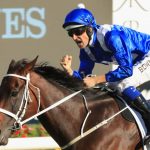 When does Winx race next? Expected 2018 racing schedule for WinxNews