Winx returns in pursuit of history at Royal Randwick

SHE missed the start but that didn’t matter at all as Winx crushed her opposition in the Group 1 Chipping Norton Stakes.

The mighty mare won her 23rd straight and claimed 16th Group 1 win with another barely believable effort to win by seven lengths at Randwick.

Winx hasn’t tasted defeat since the autumn of 2015. Since then she has gone to dominate Australian racing, winning three Cox Plates with today’s effort, her third Chipping Norton victory.

She has now surpassed Black Caviar with the most Australian Group 1 wins, it would also equal the world record held by American champion John Henry. 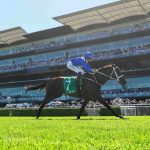