WINX has needed to produce two of the greatest runs of her career to maintain her long winning streak this season. The mighty mare was magnificent in the Chelmsford Stakes, unleashing a finishing surge that left her regular rider, Hugh Bowman, in awe as she mowed down brave frontrunner Red Excitement.

Bowman said he has never felt Winx “let go” like she did in the Chelmsford and a sectional analysis of the race supports the jockey. Winx ran her last 600m in 33.1sec, her quickest split coming in the final 200m, which she covered in 10.8s to win her 19th race in succession and take her earnings to $13.18 million.

When most racehorses begin to tire near the end of a race, Winx has the rare ability to sustain a long sprint, and the stamina to increase her speed towards the finish like she needed to do in the Chelmsford Stakes.

This phenomenal victory came after a similarly spectacular effort to win the Warwick Stakes first-up after she blew the start by four lengths. Winx will now be aimed at a 13th Group 1 win in the $500,000 George Main Stakes (1600m) at Royal Randwick in two weeks.

If successful, she will equal the number of Group 1 wins by champions Sunline and Tie The Knot and will have only Black Caviar (15) and Kingston Town (14) ahead of her. Winx is so dominant, it seems only a matter of time before she claims the Group 1 record, passes Makybe Diva’s prizemoney record of $14.52 million and claims undefeated Black Caviar’s 25-race winning streak.

Here she comes: Winx in hot pursuit of Red Excitement in the Chelmsford Stakes. Picture: Supplied

THE only negative about Winx’s Chelmsford Stakes thriller was the crowd. Fewer than 10,000 turned out on a glorious Sydney spring day to watch one of the all-time great racehorses. This was still up nearly 2000 on the Chelmsford crowd last year — when Winx was a race-morning scratching due to a wet track — but disappointing given the glorious weather and the excellent race program. 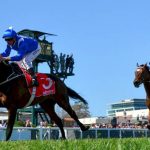 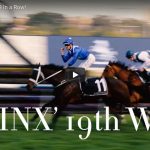