WINX is the best racehorse in the world. Forget the ratings, ignore the northern hemisphere bias, discard the critics who say she needs to race overseas, because Winx continues to produce where it matters most — on the racetrack.

At Royal Randwick on Saturday, the champion mare extended her famous winning streak with another phenomenal effort in the Group 2 $250,000 Chelmsford Stakes (1600m).Winx does the impossible. She was 12 lengths from the tearaway leader Red Excitement at the 1000m, still 10 lengths behind at the 600m, and still had six lengths to make up from the 400m.

But Winx descended so quickly on Red Excitement that her rider, Hugh Bowman, was able to give a couple of fist-pumps in the last 50m and enjoy the moment.

Winx is racing’s “Miss Perfect” — she just keeps winning. Her opposition come and go and she discards them all with a ruthless efficiency.

But the international ratings always seem to find one better than Winx even though they can’t boast her aura of invincibility.

Jockey Hugh Bowman said he had never felt Winx let go like she did on Saturday.

Winx nestles comfortably in the pantheon reserved for the all-time greats like Phar Lap, Tulloch, Kingston Town, Makybe Diva and Black Caviar, and her career statistics have been improved further with Saturday’s Chelmsford win including:

#Sydney’s super mare scored her 19th successive win to equal the records of Gloaming and Desert Gold. The only horse to win more races in succession is Black Caviar, unbeaten winner of 25 races.

#She has been unbeatable for more than two years.

#Her career earnings now total $13.18 million and is closing in on Makybe Diva’s all-time prizemoney record of $14.52 million.

#Her odds of $1.09 is the shortest she has started during her celebrated winning streak. She was also at $1.09 when she won the George Main Stakes last year.

Bowman admitted after the Chelmsford that he was more worried on Saturday than he was when Winx missed the start by four lengths and still won the Warwick Stakes two weeks ago.

I couldn’t ride any other horse like that. I was more worried than in the Warwick Stakes because we were making such a long, sustained run.

“She has this race ability to keep her sprint going but I have to say I have never felt her let go let go like she did today,’’ Bowman said.

Winx returns to the applause of the crowd at Randwick after another stunning win on Saturday.

Red Excitement wasn’t stopping either. He has maintained a strong pace to the line with closing sectionals of 11.2s. 11.29 and 11.35s. Bowman didn’t even need to use the whip on Winx — if he was carrying one.

“I didn’t want to hit her so I threw it away,’’ Bowman joked after he revealed he dropped his whip at the top of the straight. “But I was worried at the 400m as the leader didn’t look like stopping.

“The ear muffs didn’t really make any difference, although I don’t think Winx knew Red Excitement was out there. When she saw him, she really extended.’’ 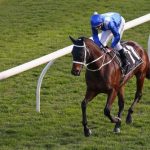 She Won Again, but is Winx Ok?News