Winx Plus 11 for Chelmsford Stakes

The champion mare, who will be at prohibitive odds for the race with essentially the rest of the field preparing for other assignments later in the spring, has barrier three to try and jump quickly from under Hugh Bowman.

Kris Lees has Sense Of Occasion with Corey Brown and barrier two, Gerald Ryan has Red Excitement with Josh Parr and barrier five and Harper’s Choice and Brenton Avdulla and barrier six, while James Cummings has Allergic with Tom Clark and barrier 12.

The Stephen Marsh trained Chocante (NZ), the winner of the Group 2 Brisbane Cup over 2200m at Doomben back in June, has barrier nine.

Winx opened in the All In TAB.com.au market on Monday at $1.06 and market updates will be provided as they become available.

Eight three-year-old fillies have been accepted for the $200,000, Group 2 Furious Stakes (1200m) including the first three in the Group 2 Silver Shadow Stakes over 1200m at Randwick on August 19th, Formality, Alizee and Champagne Cuddles.

The nine race programme with a total of 92 acceptances commences at 12.10pm with the ANZ Bloodstock News Bm 75 Handicap (1300m) and a field of eight three-year-old’s.

The track is currently rated a Good 4 after 4mm of irrigation for the last 24hrs and 10mm for the last seven days. The rail will be out 6m for the entire circuit.

Winx Will Wear Ear Muffs for the First TimeNews 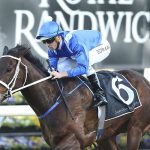