Winx Leaves it Late in Chelmsford

She didn’t miss the start but Winx gave her backers the same heart failure as two weeks ago when she arrived very late to win the Chelmsford Stakes at Randwick. Winx jumped cleanly and appeared to take up a perfect position a few spots back but was seen to be struggling before the home turn as Red Excitement sped clear.

Winx began to gradually eat into the lead but even with 200 metres remaining she was still three lengths behind. She closed to within two lengths at the 100 and then, just when it seemed she might run out of ground, the mighty mare made it 19 wins in a row in a couple of huge strides.

Trainer Chris Waller admitted he was worried that Winx’s winning run was going to end at 18. “With 400 metres to run I thought I was more concerned today than I was first-up,” he said.

“I thought she was going to get there quite easy first-up with her momentum but it is hard to gauge when you have a horse free rolling like that. He hasn’t had a soft section but credit to the second horse. He’s not a bad horse. She pulled them back pretty well at the finish.

“They turned the race on. I guess tried to break us up. It’s never what you like to see when you’ve got a horse like her chasing but fair play to them. The horse held on and ran second – it didn’t fall out and run last. Just proved that she is at her best and it’s pretty hard to beat a horse at its best. Waller confirmed the G1 George Main Stakes would be Winx’s next outing.

“We might skip a race somewhere along the way but I doubt it will be the George Main. Get a Group 1 on the way this prep and work out where we go from there. We just have to gauge each run.

“Are they tough runs? First time she missed by four or five, today she had to chase but she did pull up well after her first run so hope it is the same this time.”

Jockey Hugh Bowman said: “At the top of the straight I wasn’t worried last start but today I really was. What she did today was incredible, I mean everything she does is incredible, but I’m lost for words.

“He (Red Excitement) certainly made a race of it. He left no stone unturned. I was comfortable in the first quarter of the race but I could see what was happening so I started to make my way a bit closer from the 900-metre mark but I still had to stay within myself.

“I’m concentrating on just keeping her balanced but when she hit the afterburners at the 150-metre mark today I just can’t explain the feeling.”

Winx was wearing ear muffs for the first time after the near disaster first-up in the Warwick Stakes two weeks ago when she missed the start by four lengths.

By managing to reel in Red Excitement, Winx managed to avoid the fate that befell the 1930s champion Ajax, who was beaten when attempting his 19th-straight win at the odds of $1.03 in 1939.

She levels up with former greats Desert Gold and Gloaming on 19-straight wins and is now just six behind the unbeatable Black Caviar.

Josh Parr (Red Excitement): “I thought I had pulled it off. He is in such great form at the moment. He deserves a big win. Today he has just run into possibly the greatest ever.”

Rory Hutchings (Chocante): “It was a super run first-up. He ran the race out strongly. The only way I’d be happier is if he had won the race.”

Kerrin McEvoy (Life Less Ordinary): “It was a nice run from him. He is coming along nicely. He might’ve just peaked in that last bit so there should be natural improvement from today.”

Glyn Schofield (Libran): “It was a little too short for him but I think he resumed very well.”

Brenton Avdulla (Harper’s Choice): “I thought he ran well. When Red Excitement put the speed into the race we became one-paced. My immediate focus came to Winx and I watched Hughie. It was nice.”

Corey Brown (Sense Of Occasion): “He ran good. He’s a stayer resuming. He had to do the donkey work up until about the 600m and drag the rest of the field up. When Winx came on the scene I tried to grab a hold of her and go with her but she was just too good.”

Christian Reith (Who Shot Thebarman): “It was a good return. The horse feels good and looks to be in store for a good preparation.”

Tim Clark (Allergic): “He was doing his best work late. He is ticking over well.”

Michael Walker (Sarrasin): “I followed the champion mare everywhere she went but I was gone before the straight.”

Jay Ford (Lasqueti Spirit): “She’s not the same horse I was riding last prep. She obviously hasn’t come up.”

Winx Made to Work Again to WinNews 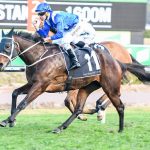 Winx Makes it 19 in a Row in Thrilling Chelmsford StakesNews