Winx Figures: Her Best In More Than A Year

Spurred on by Humidor, Winx ran +12.9 lengths above the benchmark standard when capturing her third straight Cox Plate in 2017.

She was set to peak that day, the Chipping Norton however, was a lead-up run and more than a month away from her grand-final this campaign – the $4million Group 1 Queen Elizabeth Stakes (2000m) on April 13.

Still, the Chris Waller-trained galloper ran +10.1 lengths above the benchmark standard when gunning down a brave Happy Clapper. Hugh Bowman’s post-race comments “if I had of struck her, like I have done before, I reckon she would’ve found another couple of lengths” suggests this +10.1 could’ve been higher.

Happy Clapper paved the way for Winx to return her best figures in more than a year courtesy of a brave ride from Blake Shinn.

He went through the first 800m +5 lengths above standard but he really put the foot down between the 800m and 400m running +11.4 lengths, which is low flying. It told late as Pat Webster’s crowd pleaser clocked his last 200m in 12.48s. For All Star Mile punters, his overall figure of +8.1 lengths above standard was almost four lengths superior to Mystic Journey in the Australian Guineas. The two will clash in Saturday week’s $5million showpiece.

For Winx, it’s unlikely she will be tested like this again. Either the George Ryder Stakes (1500m) or Ranvet Stakes (2000m) awaits and neither will have Happy Clapper in them.

The greatest horse we’ve seen never leads in her races meaning her benchmark figures are somewhat dictated to by the speed of the race.

The 2015 Cox Plate was a brutally run affair and Winx lapped it up running +16.2 lengths above the benchmark standard.

In Australia, only Black Caviar has run similar figures since the IVR benchmark system was created by Daily Sectionals around 20 years ago. 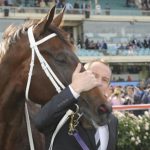