TRIPLE Cox Plate-winning champion Winx could be back for a shot at a fourth, but this spring seems over for the superstar. The blistering mare wrote her name into history at Moonee Valley this afternoon, winning a third-straight Cox Plate to equal the feat of Kingston Town.

There had been hope that Winx would run in the Emirates Stakes on the final day of the Flemington carnival but the immediate reaction following her long neck victory was to head to the spelling paddock.

“If I put it into percentages now to avoid all the questions in the next couple of days, I would say she is only a 40 per cent chance of going to the Emirates Stakes and obviously 60 per cent chance she will spell,” Waller said.

Asked about coming back to pursue a record fourth Cox Plate victory next year, Waller said: “She has won three, it’s possible.”

Waller said he wanted to let the dust settle on her record-equalling 15th Group 1 win and wouldn’t make a final decision on Flemington until at least Tuesday.

“She will be well looked after either way it goes, the horse comes first,” he said.

Taking on the world is definitely on the agenda although a Japan Cup start also looks increasingly unlikely.

Winx was inoculated for the Japan Cup, which is run over 2400m in late November, given the huge financial incentive associated with the race.

A Royal Ascot campaign is more likely next year.

Today belonged to Winx with the six-year-old notching her 22nd victory in a rowafter she and jockey Hugh Bowman narrowly held sway over a gallant Humidor, who came close to running down the champ. Import Folkswood finished third.

Waller this week described the race as Winx’s “Grand Final” and she delivered the equivalent of two-point victory kicking against the breeze in front of a sold-out Moonee Valley crowd that hung on her every stride.

The victory capped three brilliant victories at the Valley for the mare, who takes her total career prize money to more than $15 million, with Bowman having piloted her to all three Cox Plate honours.

Winning jockey Hugh Bowman said afterwards: “I just can’t explain, really. It has been such a build up and they said when we won last year nothing can prepare you for what you are in for next year. And he was right. I am lost for words.

“She has just made history. I was born the year that Kingston Town won his first Cox Plate and to think that she has emulated the great, you know, and … And you know trying to compare one horse to another, they are always different animals at the end of the day, be but we are in the presence of greatness as you said.

“She will be recognised as one of the greatest horses to grace the Australian turf and to be a part of her career, I can’t explain how much that means. She is the type of horse that you dream of. Everyone dreams of a horse like this.”

Co-owner Peter Tighe said after the triumph: “Everything fell into place. The planning of Chris Waller was exceptional again and she has proved how great she is and we have grateful that we own her and grateful that she races here in Australia. It is all surreal. We are just going through the motions at the moment. We will appreciate it later but at the moment we will just celebrate it.”

Waller acknowledged it was a tight finish as she fought the fast-finishing Humdor.

“It was close, as you would expect in a Cox Plate,” he said.

“You never know what is going to happen on a racetrack and it was great to see her moving forward in that normal style, but gee, Humidor gave us a hell of a fight.

“Fortunately we got the upper hand and yeah, well done to the connections of all runners. They have run second to a very good horse.

Humidor loomed at the 150m and for a few strides looked as though he may pass Winx.

“She had more to give,” Bowman said.

“You don’t expect, with any horse, to win 22 races in a row. So along that sequence I have never gone into a race saying we will win today, because you always have to respect what happens on a racetrack. I am pleased she has done it for the crowd and most importantly the horse.”

Waller just knew she was primed for a great performance when he saw her this morning.

Winx was a picture of health and strength, he said, and that was when he knew the pressure was off ahead of a shot at a third consecutive Cox Plate.

“Up until this morning … it’s been intense,” he said, choking up. “This morning when I saw her, she was picture perfect. That’s when the pressure stopped.”

Walking into history: Hugh Bowman embarks on the victory parade with the star of the show. Picture: Getty ImagesSource:Getty Images

Waller said the victory is “a huge relief” that he didn’t have the training under his belt for.

“It’s a sporting population that really embraces her,” he said.

“It’s like nothing I’ve ever been involved in, and may not get that opportunity again. I’ve got to take it in, but I’ve got to enjoy it and appreciate it as well.”

But he had the ultimate answer.

WHY SHE’S THE BEST

HOW THE RACE WAS WON
With Michael Manely

JUMP
Winx was edgy in the stalls and there was some apprehension she might miss the start as she’s done before but to the relief of the crowd she jumped with them. Gailo Chop was best to jump and as expected took the lead.

WINNING POST
Hugh Bowman was happy to sit four wide in sixth position. Gailo Chop was in front at the post from Folkswood who had worked across. Winx was three wide at the post with Hardham and Seaburge on her inside. Humidor settled a clear last.

1600M
The field was in the format it would stay in for a lengthy duration. Gailo Chop led by length from Folkswood with Seaburge and Hardham together in third and fourth placing. Winx was fifth and Humidor was sixth on the fence.

800M
Refer to previous field placement as Gailo Chop was still a clear leader from Folkswood with Hardham and Seaburge third and fourth. Bowman had eased Winx out three wide and she was looking ominous in fifth placing. Humidor was sixth on her inside.

400M
Bowman had eased Winx into the three wide running line and although she was fifth she had closed on the leaders out three wide. The expectation was Bowman was ready to let her go and she was going to win easily. Humidor has eased off the fence and was on the outside of Seaburge. Royal Symphony was trying to get on Winx’s back in sixth placing.

POINT OF TURN
Winx had cruised on the outside of Folkswood and Gailo Chop and looked set to win by any margin. Humidor was sneaking into the race in fourth placing and was going well.

WINNING POST
Winx looked home but all of a sudden Humidor emerged out wide. The crowd was almost in a state of shock there was a challenger. For a stride or two it looked as if Humidor could beat her but she extended to hold on. 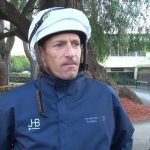 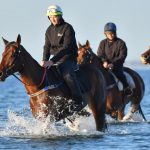 The fact that the international ratings don’t have Winx as No. 1 is reflective of the bias towards northern hemisphere racingNews