THE ghosts of legendary champions Ajax and Kingston Town could come back to haunt Winx at Royal Randwick on Saturday. Winx won’t be aware but there are some unnerving similarities with those former champions the mighty mare must overcome to win the Group 2 $250,000 Chelmsford Stakes (1600m). The superstar of Sydney racing has won 18 races in succession — the same number Ajax had recorded before his winning run came to a shock end. Ajax was a 40/1 on favourite when beaten by 33/1 outsider Spear Chief in the 1939 Rawson Stakes — the biggest upset in Australian racing history. It was thought the flaxen-maned champion simply had an “off” day.

But it was an equine traffic jam that ended the great Kingston Town’s 21-race Sydney winning streak in the 1982 Chelmsford Stakes. “The King” was pocketed on the fence and never got clear galloping room before finishing fourth behind Rare Form. Kingston Town drew barrier three that day, the same barrier position Winx will start from in Saturday’s Chelmsford. But Kingston Town rebounded from that shock loss and won an unprecedented third successive Cox Plate that spring — a record Winx could equal next month.

Kingston Town bounced back from a shock defeat in the 1982 Chelmsford Stakes to win his third Cox Plate later that spring.

Winx is set to start at the shortest odds of her celebrated career in the Chelmsford Stakes with TAB Fixed Odds offering $1.08 about the mighty mare to record her 19th successive win. This is despite a bet of $63,000 at $1.06 on Winx soon after the final field was declared on Wednesday morning. Trainer Chris Waller and jockey Hugh Bowman were relaxed and confident after Rosehill trackwork yesterday that Winx has done everything right since her memorable first-up win in the Warwick Stakes two weeks ago. Winx galloped solo wide out on the Rosehill course proper and although she wasn’t out to make time, she showed that her tough first-up run to win the Warwick Stakes nearly two weeks ago has not taken anything out of her.

The mighty mare wore the ear muffs in the gallop which she will do tomorrow in an endeavour to ensure she doesn’t become fractious in the barriers and miss the start badly gain like she did in the Warwick Stakes. “Winx is 3-4kg lighter than she was before the Warwick Stakes,’’ said Waller when asked if Winx had improved since her Warwick Stakes. “We gave her a really solid gallop on Tuesday where she was very impressive so this morning was more a maintenance gallop. We are really pleased with her, she has done everything right since the Warwick Stakes.

Winx’s long winning streak has transcended racing, attracting the imagination of sports as evidenced by the large contingent of electronic and print media at Rosehill before sunrise for her trackwork hitout yesterday. But Winx seemed as calm and nonchalant as her trainer and jockey and certainly wasn’t fazed by the crowd of onlookers, television cameras and flash photography that surrounded her after the gallop. Bowman said he has noticed a change in Winx’s behaviour since the Warwick Stakes.

“She has relaxed a little bit in her demeanour,’’ Bowman said. “She was quite full of herself, jumping around before, but I feel a bit of that nervous energy has left her body.

Hugh Bowman says Winx is more relaxed going into her second run for the campaign.

Bowman retains a supreme confidence in Winx but revealed his only moment of unease is when the mare is placed in the barriers at the start. “The only time I’m nervous when I’m on her back is in the barriers because she does have the tendency to be a little bit anxious and although the timing was most inappropriate last start we are hoping that it won’t happen again,’’ Bowman said.

“It’s just a case of Winx being Winx and we’re aware of it and always have been. She knows it’s game time. She is obviously very intelligent so just wants to get on with the job. The best thing I can do is stay relaxed myself and not get too carried away with what we saw last start.’’ Bowman believes the ear muffs will ensure Winx jumps away cleanly on Saturday. “Winx wears them (ear muffs) all the time, it dulls the sound,’’ Bowman said. “Horses can be sensitive creatures and react to sound. The idea is to help her stay a little more relaxed.’’ Bowman said Winx’s ability to overcome adversity which she demonstrated in the Warwick Stakes was a further example of her champion qualities. The engine in her is unique.

“She can push other horses to their top gear well before she is in her top gear and that’s why she tends to put a big space on her rivals early or midway down the straight because the opposition are already red lining,” Bowman said. “But her manners are that of most good horses, she is very sensible, straightforward and she knows her job.’’ Waller was also asked what makes Winx so good and his reply was disarmingly matter-of-fact: “What makes her fast? Well, her legs move faster than anything else,’’ he said. “She covers the ground so quickly so I guess the simple answer is that she is fast. “It’s been well documented that she doesn’t have a long, exuberant stride but she just gets the job done and moves very quickly. We see that in her races from the 400m to the 200m mark, where she just has amazing acceleration.

“Hugh Bowman said after the (Warwick Stakes) that it’s the first time we’ve had her up to top speed so it was good to see she can run-off amazing sectional times. Although it was wind assisted, I don’t think I’ve ever had a horse go that fast.” 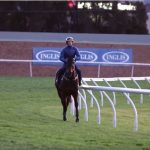 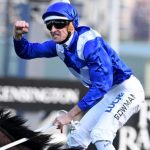 Winx Made to Work Again to WinNews