Superstar Winx to make Apollo Stakes Day appearance after all

WINX won’t be racing in the Apollo Stakes next Saturday but the champion mare will still be the headline act at the Royal Randwick meeting.

Racing NSW chief executive Peter V’landys has approved a request from trainer Chris Waller to allow Winx to compete in what is essentially a barrier trial between races.

Waller has confirmed stablemates Who Shot The Barman, Libran, Mackintosh and McCreery will line up against Winx in a 1200m trial that has been dubbed the “Winx Rehearsal”, which will be run at 2.35pm after third race at the February 17 meeting.

Races 4-9 will be rescheduled one race back with the last at 6.25pm.

This pro-active move by Racing NSW, in conjunction with the Australian Turf Club, provides Winx with a simulated race as part of her preparation towards a comeback in the Group 1 Chipping Norton Stakes (1600m) at Royal Randwick on March 3.

Earlier this week, Waller decided against starting Winx in the Apollo Stakes as the mare’s regular rider, Hugh Bowman, is serving a careless riding suspension.

The barrier trial between races next Saturday will ensure Winx’s fitness to resume at 1600m in the Chipping Norton Stakes where the mighty mare is aiming for her 23rd successive win and her 16th at Group 1 level.

“Winx has captivated the imagination and heart of the Australian public for the past few years. Sports need charismatic champions that get everyone talking and have that ‘wow’ factor. Winx has it all in spades,’’ V’landys said.

“The Winx Rehearsal on Saturday 17 February provides the racing public with the opportunity to see Winx step back on to the headquarters of racing in Australia, Royal Randwick Racecourse, in preparation for her assault on history.”

As an added bonus, Bowman will be fitted with a microphone and camera for next Saturday’s trial to allow the public to receive an insight into discussions between the jockey and Waller as Winx is readied for her Chipping Norton comeback.

Australia’s favourite racehorse will make a guest appearance on Apollo Stakes Day. Picture: Getty Images
Waller agreed this “is an interesting way” to give the general public a behind the scenes look at “Team Winx”.

“It is obvious that people want to know more about her and it is hard to find new ways to be able to convey to people what she is like without repeating ourselves in the media or at the races, so this will certainly give an insight into what goes towards preparing a horse for a big race,’’ Waller said.

“As we see in modern day sport, especially on the television whether it be the 20/20 cricket or motor car racing, and as early as this week, the Super Bowl, the general public want new initiatives and new ways to connect with the sports they follow, so I am certainly looking forward to being part of this initiative.”

Hugh Bowman will be fitted with a microphone and camera for next Saturday’s trial. 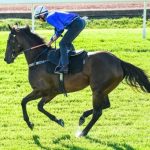 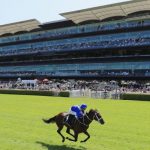