THE part-owner of Winx and another who shared in the ownership of Black Caviar have joined forces to chase Golden Slipper glory.

Performer, a chestnut colt by super sire Exceed And Excel out of the Snippets mare Gavroche, was purchased by a group of owners including Tighe and Werrett for $450,000 from the 2017 Magic Millions Yearling Sales on the Gold Coast.

“The syndicate was put together by Liam Prior and we went to the Magic Millions last year to buy half a dozen colts,’’ Tighe said. “We were looking for stallion prospects. There are eight of us in the group and together we bought six colts.’’

The Chris Waller-trained Performer has the pedigree and conformation of a commercial stallion and now he is putting together the racetrack record to complete the package.

Performer, who is a half-brother to Group 1 winner Bel Sprinter, has been at the top or near top of betting for the $3.5 million Golden Slipper (1200m) at Rosehill Gardens on March 24 since he scored an impressive debut win in the Breeders Plate at Randwick back in the spring.

The Chris Waller-trained colt has only had one run since and that was for a narrow win over Stratosphere in the Canonbury Stakes at Rosehill just over a month ago. He finished a close second to Bondi in a Randwick barrier trial leading into Saturday’s race.

“Performer wasn’t really fired up for the Canonbury Stakes as there was a big gap between runs,’’ Tighe said. “Chris had the colt prepared to run well that day as part of the program he has mapped out for the Golden Slipper.

“We will get through (Saturday) and Performer will peak for the Golden Slipper in two weeks.’’

Tighe had been racing horses for more than two decades without a Group 1 winner before Preferment (Victoria Derby) and Winx (Queensland Oaks) emerged in the 2014-15 season.

The four years have been an extraordinary period of continued success for Tighe, particularly as Winx has gone on to win 16 Group 1 races and is now rated the world’s best racehorse on turf.

But Tighe said he never imagined himself to be in this position just a few years ago when the unbeaten Black Caviar was the dominant champion.

“I was in awe of Black Caviar,’’ Tighe said.

“I used to go the races just to watch her, dreaming of what it would be like to race one as good as her. I never thought I would be in this position with Winx like Neil was with Black Caviar.’’

Winx broke Black Caviar’s Australian Group 1 record when she romped away with her 16th major in the Chipping Norton Stakes at Randwick last week.

On the eve of Winx’s historic win last week, Werrett was upbeat despite the inevitability that Black Caviar’s Group 1 record was about to be eclipsed.

“Records don’t last forever, you see that in all sports,’’ Werrett told The Daily Telegraph. “But I think it is such a positive for racing to have a champion like Winx. She just seems to be getting better.’’

Performer isn’t the first horse Tighe and Werrett have raced together, either.

“Neil and I have been in some overseas horses together and a few others,’’ Tighe said. “It’s good to have winning horses with Neil, he lets his horses do the talking.’’

Tighe has never had a Golden Slipper runner before so he could be breaking new ground at Rosehill in two weeks if Performer takes his place in the world’s richest juvenile race.

“I remember being at Rosehill last year watching She Will Reign win the Golden Slipper and how good it was for her owners,’’ Tighe said.

“If Performer is in the Golden Slipper in two weeks, it would be a great experience just to have a runner in the race.’’

PETER Snowden, the two-time Golden Slipper-winning trainer, is convinced Pure Elation has the natural ability to be competitive in the world’s richest juvenile race.

But it is now or never for Pure Elation when she lines up in the Group 2 Reisling Stakes (1200m) at Randwick on Saturday.

Pure Elation, unplaced in her only two starts, needs to win to secure a start in the $3.5 million Golden Slipper at Rosehill in two weeks.

In fact, all eight fillies contesting the Reisling Stakes are in a must-win situation including hot favourite Estijaab, who is currently only 19th in Golden Slipper order of entry.

The Reisling winner is exempt from Slipper ballot and this is the last chance Pure Elation has of getting into the 16-horse Golden Slipper field on March 24.

Pure Elation (107th in Slipper order of entry) had two starts at Caulfield in Blue Diamond lead-ups, finishing fifth and seventh respectively but Snowden said the filly didn’t get the show her talents.

“Nothing went right for her in those two Melbourne runs,’’ said Snowden, trainer of Golden Slipper winners Sepoy (2011) and Capitalist (2016). “We thought about tipping her out but brought her back to Sydney and she was doing so well we gave her a trial at Gosford which she won nicely.

“Her work has been very good since and, from the inside barrier, she will give herself every chance to be in the mix.’’

Snowden is also pushing on with Slipper campaigns for Bondi (52nd) and Tchaikovsky (131st) who are in the odman Stakes (1200m) on Saturday.

Both colts are also entered for the Group 3 Black Opal Stakes at Canberra on Sunday with the Snowden stable likely to split the youngsters.

“We only have one shot at getting Bondi into the Golden Slipper so we are going to have to make it count,’’ Snowden said.

“The plan is to accept for Canberra as well and then decide what the best race is for him. He has freshened up nicely since the Magic Millions (sixth to Sunlight) and I thought he trialled nicely. With Tchaikovsky, I have a slight leaning to running him at Randwick.’’ 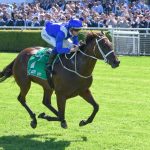 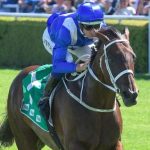