Cox Plate 2017: Winx draws a crowd as belle of the ball emerges from the darkness

Racing’s traditional veil is darkness, but the lights of the Gen Y iPhone salute give the game away. It’s 21st-century star has a 21st-century way of being recorded for history.

They’re five-deep behind the fence outside a nondescript tie-up stall out the back of Moonee Valley before dawn, shining a light to make sure it’s really her. At least a couple of hundred of them at 5.45am. To see a horse. A bloody fast horse.

Champion mare Winx galloped at the course in front of a good crowd at Moonee Valley racecourse on Tuesday, in preparation for her attempt to win a record-equalling third Cox Plate on Saturday.

They stare. She stares back. They jostle for position. She digs her heels in and doesn’t move. She’s walked around a pre-parade ring to limber up. They shuffle quickly to another vantage point. You hear them move before you see them move. Quick, get a pic of her over there. She comes back. They come back.

Her owners can’t get closer than the back blocks, just wanting to see their horse.

Winx is not Kepitis’ horse any more. Nor Peter Tighe’s. Or Richard Treweeke’s. She’s Australia’s horse. The people’s horse.

“I’m just not used to this and having to sign autographs,” Kepitis shrugs.

Winx glides across the Valley in a brisk 1200-metre workout, a crowd of about 2000 to watch what is essentially a practice run. It’s eerily silent as she floats down the truncated home straight and past the post. Quiet please, a master is at work.

“As she came up the straight you could have heard a pin drop,” trainer Chris Waller said. “It was quite eerie but very humbling to see all the people here this morning for her.”

Black Caviar’s trainer Peter Moody is carrying a microphone and is probing Waller in his role as corporate bookie comedian, Waller dashing from interview to interview. Moody should give him a hug.

And he then provides the biggest surprise of the morning when he slips a nomination in for a horse he owns, Hardham, to fight a fight no other horse has won with Winx. It’s accepted by the famously rigid Moonee Valley committee, on merit they stress but with a tinge of just wanting another horse for the show. They’ll have eight lining up against Winx.

“I’m not going to fall into the trap and I’ll have a healthy respect for my rivals,” jockey Hugh Bowman said. “It’s a horse race and anything can happen.”

But only one thing will. Racing’s feminine fighters Gai Waterhouse and Michelle Payne are at the Valley, but more cameras are shoved in front of the four-legged belle who can’t speak. Payne doesn’t want to say she’s riding for second on overseas raider Kaspersky, even if she knows it. Royal Symphony’s quick-witted trainer Tony McEvoy says as much.

Asked about the $440,000 runner-up prize being the only thing on offer, McEvoy quips: “Absolutely not. Mr Bailey [chief steward Terry Bailey] is in the room. You’ve got to go out with a plan to win every race you’re in. We haven’t told Royal Symphony that Winx is in the race.”

But everyone else has been told.

“Last Tuesday we did a track gallop and it was just me, Chris, Hugh, two handlers, the horse and all the staff at Moonee Valley,” Tighe said. “[But] from one Tuesday to the next it’s just mind-blowing how many people come.

“There were people who came from Western Australia for this track gallop just to say their kids are here. Other people have just come down for the morning … from everywhere. It’s mind-blowing.”

That’s because his horse is. Saturday’s iPhone salute is waiting. 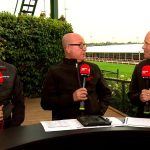 Breakfast with Winx at The ValleyNews 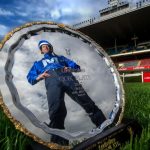